The Greeks gave us the Olympics. Let them have their marbles
Elgin's behaviour would be absolutely unacceptable today
Henry Porter
The Observer, Sunday 20 May 2012 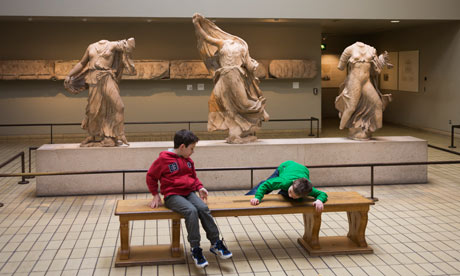 
Despite the disintegration of their politics and economy, the Greeks can still muster a crew of vestal virgins to light and nurture the Olympic flame. The ceremony had a bogus feel but, dressed in that clinging material the Athenian sculptors rendered so miraculously in marble, the virgins of Vesta the goddess of fire really did look as though they had served as caryatids or just stepped from an ancient frieze.

The idea of the flame and its journey is to imbue the branded and, I have to say, slightly tiresome modern Olympiad with the spirit of the games that were first held in 776BC in honour of Zeus. But the sight of these women also reminds us that, while ancient Greece has given so much to the modern world and sets some kind of bar for all civilisation, it is dishonoured as well as honoured in the 2012 Olympic city.

Those photographs from Greece last week sent me straight round to the chief site of that abuse, the Duveen Gallery at the British Museum, where the Parthenon marbles are displayed and there are as many diaphanously clothed virgins as you would wish to clap eyes on.

Don't get me wrong – this is not to attack the British Museum, which certainly represents a high point in civilisation and has a terrific director in Neil MacGregor. But it is a plea that we be honest with ourselves about the presence of so many of the Parthenon sculptures in Britain. There are bits and pieces in other European museums, but the great proportion of this incomparable work has been here since it was chiselled and sawn from the Parthenon by the Scots peer Lord Elgin just over two centuries ago. "The sea-ruling Britannia snatched the last spoils of Greece, that was in the throes of death," as Byron put it.

The only allusion to the controversy of the continued presence in this country that I could find in the museum was a notice near the entrance to the Duveen Gallery. "Elgin's removal of the sculptures from the ruins of the building has always been a matter for discussion," it says with a dry little cough before briskly moving on. "But one thing is certain – his actions spared them further damage by vandalism, weathering and pollution."

I'll come to the weathering and pollution later, but it's hard to fathom a logic that suggests that the advantages of this order of pillage include saving the sculptures from vandalism. That would justify cutting a section of Botticelli's Birth of Venus from its frame to preserve it from any future vandals.

I won't dilate too much about the experience of seeing the marbles close up, which is something the ancient Greeks never did, because they were placed high on the Parthenon, but what is moving is the human detail of the sculptures – the snapshots of people turning round to see what's going on, struggling with a bullock that is about to get loose, and men expiring at the hooves of centaurs. There is a deep love of the physical world in every fleeting action and gesture, particularly in the horses, which are shown at rest, exhausted or suddenly breaking into an exhilarating canter with their manes flying, muscles engaged, veins bulging. You are tempted to say the artists who observed so keenly and reproduced what they saw in marble with such accuracy were just as sophisticated as us. Not true – they were far superior.

I have been going to see the marbles since studying art in the 1970s; indeed I went when I met my old tutor of 40 years ago, Dr Ulrich Finke, for lunch near the British Museum recently. And in that time I have gradually come to feel uneasy about them. It's like being shown a collection of work by Picasso and Cézanne in someone's house and being told the paintings are stolen. It colours the experience, because the appreciation of great art cannot be illicit, and knowledge of a theft affects the way you see.

Perhaps we shouldn't be too precious about this – many works of art are acquired dubiously. But the Parthenon marbles are different because they were the height of man's achievement in the fifth century BC, and for about 2,000 years after that. They represent the core of Greek civilisation, and they are the beating heart of modern Greek identity. And, as important, the sculptures really represent half the building that was constructed between 447BC and 432BC to mark the defeat of the Persians by Athens.

If you ask the people who argue passionately for retention when they last went to see the marbles, it is striking how few have been in the past five years. It seems to be simply a matter of patriotic possession to them, rather than any great love of art. And talking of possession, they always tend to forget that the sculptures were prised from the Parthenon when the Turks ruled the Greeks, and they could not defend the emblems of their glorious past. If possession ever was nine tenths of the law, it is also true to say that it is often nine tenths of guilt. Works of arts looted by the Nazis were not allowed to stay where Goering hoarded them but were returned to their rightful owners. I don't put the marbles in the same category, but they are on that spectrum of misappropriation.

The late Christopher Hitchens campaigned long and hard for the return of the marbles. In a piece for Vanity Fair three years ago, he pointed out that all the arguments concerning pollution and weathering were now redundant, because the Greeks have built a beautiful museum ready to house their heritage. A few fragments from the frieze have begun to trickle back to Athens but the Greeks await the bulk of Phidias's masterly work and their heritage.

The argument that restoration would set a precedent is also false, because there are very few works in the world that fall into the category of the Parthenon marbles, which inspire deep feelings of national loss and yearning.

To weigh the issue, you need only ask yourself if Elgin's behaviour would be acceptable today. Of course it wouldn't, and nor would we expect to keep the result of such looting. So why do we hold on to these ill-gotten sculptures now?

While the Greeks strip their banks of money and head towards an economic precipice, it is hardly the moment to ship the marbles out of Tilbury.

However, I am suggesting that in the light of everything western civilisation owes Greece – in terms of democratic ideas, the Olympics, science, art and architecture – we should begin to address a simple truth: the Parthenon marbles are not ours to keep.