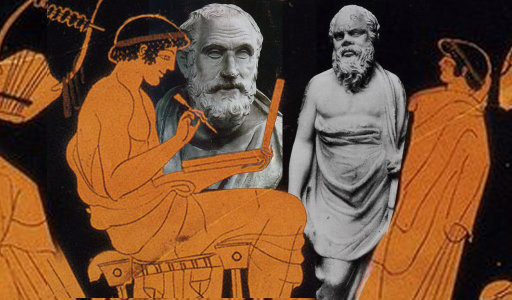 What advice would the ancient Greeks provide to help modern Greeks with their current financial worries?

1. Debt, division and revolt. Here's the 6th Century BC news from Athens.

In the early 6th Century BC, the people of Athens were burdened with debt, social division and inequality, with poor farmers prepared to sell themselves into slavery just to feed their families.

Revolution was imminent, but the aristocrat Solon emerged as a just mediator between the interests of rich and poor. He abolished debt bondage, limited land ownership, and divided the citizen body into classes with different levels of wealth and corresponding financial obligations.

His measures, although attacked on all sides, were adopted and paved the way for the eventual creation of democracy.

Solon's success demonstrates that great statesmen must have the courage to implement unpopular compromises for the sake of justice and stability.

2. What happens next? The Delphic oracle

Ancient Delphi was the site of Apollo's oracle, believed to be inspired by the god to utter truths. Her utterances, however, were unintelligible and needed to be interpreted by priests, who generally turned them into ambiguous prophecies.


How would the gods on Mount Olympus tackle the IMF and the bond markets?
In response to, say, "Should Greece leave the euro?" the oracle might have responded: "Greece should abandon the euro if the euro has abandoned Greece," leaving proponents and opponents of "Grexit" to squabble over what exactly that meant. It must have been something like listening to modern economists. At least the oracle had the excuse of inhaling the smoke of laurel leaves.

Wiser advice was to be found in the mottos inscribed on the face of Apollo's temple at Delphi, advocating moderation and self-knowledge: "Know yourself. Nothing in excess."

3. Nothing new under the sun: The sage Pythagoras

If modern Greeks feel overwhelmed by today's financial problems, they might take some comfort from remembering the world-weary advice from their ancestor Pythagoras that "everything comes round again, so nothing is completely new".

Pythagoras of Samos was a 6th Century BC mystic sage who believed that numbers are behind everything in the universe - and that cosmic events recur identically over a cycle of 10,800 years.

His doctrine was picked up by the biblical author of Ecclesiastes in the 3rd Century BC, whose phrase "There is nothing new under the sun" is repeated more than 20 times.


Worse things happen at sea: Homer's Odyssey shows the spirit of fortitude in adversity
If you look at the picture at top of the story, the young man with a laptop on a Greek vase from 470 BC (in fact, a writing-tablet) seems to prove the proposition.

4. Mind you, it could be worse… Odysseus and endurance

"Hold fast, my heart, you have endured worse suffering," Odysseus exhorts himself in Homer's Odyssey, from the 8th Century BC.

Having battled hostile elements and frightful monsters on his return home across the sea from Troy to his beloved Ithaka and wife Penelope, Odysseus here prevents himself from jeopardising a successful finale as a result of impatience.

The stirring message is that whatever the circumstances, one should recognise that things could be, and have been, even worse. Harder challenges have been faced and - with due intelligence and fortitude - overcome.

5. Are you sure that's right? Socrates and tireless inquiry

"The unexamined life is not worth living for a human being," said Socrates.

By cross-examining ordinary people, the philosopher aimed to get to the heart of complex questions such as "What is justice?" and "How should we live?" Often no clear answer emerged, but Socrates insisted that we keep on asking the questions.


"A martyr to moral inquiry": Statue of Socrates outside the Bank of Greece in Athens
Fellow Athenians were so offended by his scrutiny of their political and moral convictions that they voted to execute him in 399 BC, and thereby made him an eternal martyr to free thought and moral inquiry.

Socrates bequeathed to humanity a duty to keep on thinking with tireless integrity, even when - or particularly when - definite answers are unlikely to be found.

6. How did those jokers end up in charge? Aristophanes the comedian

The most brilliantly inventive of comic playwrights, Aristophanes was happy to mock contemporary Athenian politicians of every stripe. He was also the first to coin a word for "innovation".

His comedy Frogs of 405 BC, which featured the first representation of aerial warfare, contained heartfelt and unambiguous advice for his politically fickle fellow citizens: choose good leaders, or you will be stuck with bad ones.

7. Should we do the same as last time? Heraclitus the thinker

"You can't step into the same river twice" is one of the statements of Heraclitus, in the early 5th Century BC - his point being that the ceaseless flow of the water makes for a different river each time you step into it.


Hippocrates: "Wishful thinking will not produce a cure"
A sharp pupil pointed out "in that case you can't step into the same river once", since if everything is constantly in flux, so is the identity of the individual stepping into the water.

While change is constant, different things change at different rates. In an environment of ceaseless flux, it is important to identify stable markers and to hold fast to them.

Bond markets, debt and bail-outs must feel like a similar challenge.

8. Tell me the worst, doctor. Hippocrates faces the facts

Western medicine goes back to Hippocrates, late 5th Century BC, and doctors still take the "Hippocratic oath". An extensive set of ancient medical observations details how patients fared when they were treated by means such as diet and exercise.

What is exceptional in ancient thinking about health and disease is the clear-sighted recognition that doctors must observe accurately and record truthfully - even when patients die in the process.

Magical or wishful thinking cannot bring a cure. Only honest, exhaustive, empirical observation can hope to reveal what works and what does not.

9. Seizing the opportunity: Cleisthenes and democracy

The ancient Greeks were strongly aware of the power of opportunity - in Greek, kairos. Seizing the moment - in oratory, athletics, or battle - was admired and viewed as an indication of skill.


The oracle at Delphi: Always ambiguous enough to be right afterwards, rather like modern economists
In many cases, such temporary innovation, born of the moment, will be more enduring, especially if successive innovators build on its principles.

When the tyrants of Athens were deposed at the end of the 6th Century, the leading citizen Cleisthenes needed to think up a constitution that would cut across existing structures of power and allegiance.

He devised with amazing rapidity a system of elective government in which all the citizens (the Greek word "demos" means "the people") had a single vote - the world's first democracy.

Asked to measure whether a crown was made of pure gold, the Sicilian Greek Archimedes (3rd Century BC) puzzled over a solution.

The story goes that when he eventually took a bath and saw the water rising as he stepped in, it struck him that an object's volume could be measured by the water it displaced - and when weighed, their relative density could be calculated.

He was so excited by his discovery that he jumped out of the bath and ran naked through Syracuse shouting "Eureka!" - Greek for "I've got it!"

Finding the solution to a knotty problem requires hard thinking, but the answer often comes only when you switch off - and take a bath.

Armand D'Angour is a lecturer in classics at the University of Oxford and author of The Greeks and the New: Novelty in Ancient Greek Imagination and Experience and the forthcoming Eureka: Seven Principles of Innovation from Ancient Greece